Get In Touch With Us

We BNH Gas Tanks are exporter and manufacturer of LPG Bullets, LPG Mounded Bullets at cheap cost. With the knowledge and experience in this respective domain we are engaged in offering high quality LPG Bullet Tanks. The offered tank is extensively used for keeping and storing LPG gas. We only use high quality raw material and advanced technology while manufacturing this tank. The offered tank is widely cherished all over the nation for its salient features. With our quality range, we are able to keep a sturdy foothold in this market. LPG bullets are the huge capacitive tank like structures which are named after its specifically designed shape in the form of bullet. These LPG bullets tanks are used for the purpose of saving the liquid petroleum gasses in a safe and efficient manner. These LPG bullets are robustly manufactured using top grade materials which are tough and tensile. Our company is offering these LPG bullets to its clients in different regions of the country at very reasonable range of prices. These LPG bullets are very much purposeful in several industrial utilities. 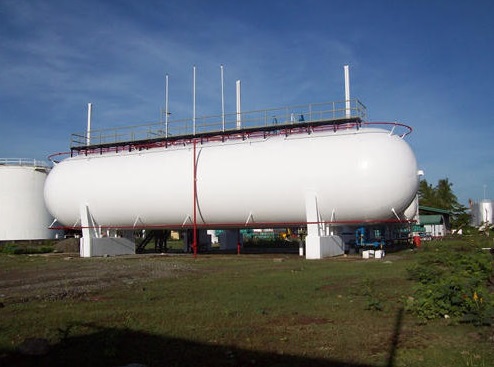 
BNH Gas Tanks can supply multiple LPG Liquefied Petroleum tanks LPG Bullets & systems in a range of sizes to suit the requirements of the customer on Turnkey Basis. The two main forms of LPG are commercial butane and commercial propane. LPG may be liquefied by moderately increasing the pressure or by reducing the temperature. Refrigerated storage is used by gas suppliers to store large volumes of LPG. The main form of LPG storage is in special tanks known as 'pressure tanks'. Commonly these pressure tanks are termed 'bulk tanks' or LPG Bullets. because LPG has a high coefficient of expansion in its liquid phase, the tanks are never completely filled with liquid (tanks are filled to approximately 85% of their water capacity), the remaining space being taken up with vapor (often referred to as the vapor space) to facilitate expansion without allowing the liquid to become 100% full (often known as hydraulically full).

Get in touch with us!

We seek to create long-term relationships built on results. See how your business can benefit with BNH Gas Tanks on Your team.

Response time of 24hrs. Our support office is availbale monday to saturday.

Instant response time from monday to saturday from 9am to 6pm.

Instant response time from monday to saturday from 9am to 6pm.